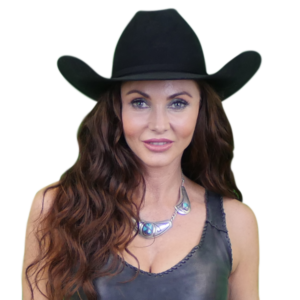 Bobbi Jeen Olson was born and raised in New Mexico.  This New Mexico girl attended Moriarty High School, and throughout her life has taken acting classes, Real Estate classes, and various other classes at Central Arizona College.  Bobbi Jeen is Co-owner of Western Trading Post which is a multi-generational family owned business that can trace its roots back to the late 1800’s. Bobbi Jeen is a professional model, actress, stunt double, and TV Host. However, she started off as a cowgirl. Growing up in the ranching way of life and following the team roping circuit enabled her to lead a diverse life. Eventually this trail led to the Western film and fashion industry. Her passion is to work on positive, family oriented, projects which help promote our Western heritage. She has appeared on the cover of various magazines, been the subject of high-fashion photo shoots, runway shows and appeared on-screen in both television and film. She co-hosted the Miss Rodeo America Coronation, produced and hosted many Fashion Shows including one which was aired nationwide on RFDTV/The Cowboy Channel. She is also the Host for Western Trading Post TV (Sundays 7:30) on the Cowboy Channel which is now going into its third season on national TV and filmed mostly in Arizona. Bobbi Jeen works alongside the Arizona Film Commission as a Film Resource Coordinator for Pinal County, and is intricately involved in her community, not only local, but the Western and film community, which knows no borders. Bobbi Jeen loves to keep our Western heritage alive to pass on to the next generation. On any given day you may find her working with horses and cattle, teaching youngsters the cowboy way, or see her portraying it in print and film. Find out more at www.BobbiJeen.com

Bobbi Jeen is married Jim Olson, which she refers to as the love of my life! We have been together for over 21yrs. This duo has an 18yr old son “who is amazing in every way, Rowdy Olson- My world”! The other important person in their life is our Grammy-her mother who also owns part of Western Trading Post and is my ROCK! Their family also includes dogs, cats, horses, and of course cattle.

Bobbi Jeen is very passionate about our youth and their future. As a mentor to many, “I love seeing others dreams come true”! Some fun facts about Bobbi Jeen is that she loves to promote the western lifestyle. Acting, modeling, stunt doubling and mentoring others is on the top of my list of things to do! Dreams do come true, it just takes a lot of hard work, time, dedication, tears and faith”.

When we asked Bobbi Jeen why she agreed to dance for this event, she said “I love helping our community and our youth and this is a fabulous cause. I just hope I remember how to dance after 20yrs…lol”! Growing up, it was her goal to “do as many things as possible and be good at them:”! 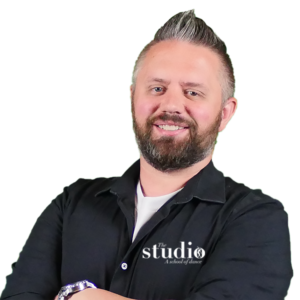 Bio:
Daniel grew up in Idaho where he started dancing at the age of 12. He became a Latin ballroom competitor, and was able to travel to may parts of the world. Daniel became a tow time national finalist in the Youth Open Latin division. He has been teaching for the past 17 years, and has coached many dance teams along the way. He has studied ballroom with many top world competitors, as well as Ballet, Jazz, and Dance Education at BYU-I, and CGU.